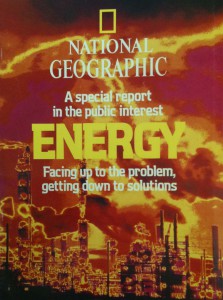 We’re a nation of champion procrastinators. That’s my conclusion after reading National Geographic’s special report, Energy: Facing up to the problem, getting down to solutions.

The piece is straightforward with hardly any breaking news. For instance, who (at least among those based in reality) doesn’t already know that the U.S. economy has been heavily dependent on cheap energy? Or that our insatiable thirst for petroleum sends countless dollars overseas and leaves us vulnerably dependant on unstable parts of world? Or that burning coal releases huge amounts of carbon dioxide, destabilizing our protective climate?

But why the unkind charge of procrastination?

Because the National Geographic special report was published way back in February 1981! (Special thanks to Chris Kolb who found it while helping his mom recycle her old magazines.)

To put this in chronological perspective, interns in our office chuckled at seeing “Soviet Union” in a news report. And the publication date is close enough to the 70’s that bell-bottom pants, feathered hair and sideburns show up in the photos. What this relic periodical proves is that we largely grasped today’s energy predicament back when “Ordinary People” won best picture and Dolly Parton’s “9 to 5” was the top single. Yet here we are in 2012 without a coherent national consensus on what to do.

Here are a few more nuggets from 1981 that echo today’s “current” energy debate:

Clearly the key discussion parameters were set 30 years ago and we’ve been kicking the proverbial can down the road ever since. Why has our national energy debate been so stuck? Why such collective procrastination? Ironically, the special report identifies at least one reason that still rings true: “Burdened by overcomplicated lives, we sit and wait for a simple fix.”

“Americans like to believe that technology will solve any problem quickly if we work at it hard enough and throw enough money at it.  After all, we sent men to the moon, didn’t we? But in the case of energy such a belief is compounded of wishful thinking and a lack of understanding of the limits of technology when faced with complex and intractable problems. It also fails to appreciate that often the obstacles are not technological but institutional – for example, pressure from interests that feel they would be adversely affected by new developments.”

This observation is as valid in 2012 as it was in 1981. Hopefully, it points a way forward using technologies we already have – provided we can overcome the obstinacy of those “interests” to institutional change. Below are three critical cases in point:

According to National Geographic in 1981, “Study after study reaches the same conclusion: The cleanest, least expensive, and least vulnerable energy option today is to use less by being more efficient.” However, distorted energy markets and regulatory barriers continue to skew investments away from energy efficiency. Michigan wisely passed legislation in 2008 that removed some of these barriers. The result? Energy efficiency saves Michiganders $4.88 in avoided energy costs for every $1 invested, according to a Michigan Public Service Commission analysis. This law should be expanded.

Inexplicably, a few current state representatives have introduced bills that would eliminate cost-effective utility efficiency programs. What don’t they understand about “least expensive?”

The relatively young but maturing clean energy sector has been one of the Michigan economy’s recent bright spots. The state’s 10 percent renewable energy target has been crucial to this success by helping offset enormous subsidies enjoyed by imported coal, on which Michigan still relies for more than half of its electricity.

And the new, clean energy is already cheaper than new coal-fired electricity would be, according to another MPSC analysis.

But one of the bills mentioned above would also kill the 10 percent renewable energy target. Coal exporters in Wyoming, Illinois and West Virginia are definitely rooting for passage of this legislation.

To the rescue is a proposed ballot initiative that would increase Michigan’s renewable target to 25 percent by 2025. Countdown to election day in November!

People in general, and Americans in particular, chafe at hearing they can’t do something. Given our love affair with cars, this one’s big. But as the special report shows, we knew even back in 1981 that U.S. crude oil reserves were being extracted faster than new discoveries could be made. And dirty substitutes like tar sands and shale oil – no matter how large the resource – are simply not equal to conventional crude oil in terms of cost and rate of extraction.

Not to be outdone by mere facts, some in Congress are intent on making Mother Nature bend to their iron will and diamond-tipped drill bits. But their quixotic quest for oceans of domestic crude that no longer exist would divert precious dollars away from badly needed demand-side investments. These include better vehicles, public transit systems and more walkable, liveable cities and towns – things that would dramatically reduce our thirst for foreign oil.

These three cases all feature responsible policy options; and all feature dogged opposition that must be overcome if we are to make meaningful improvements in how we deliver and consume energy.

In 1981, the National Geographic special report asked its readers, “Can the American people find long-range solutions to this problem of voracious demand versus uncertain supply?” It also posed, “The question is whether we are diligent, clever, and lucky enough to make this inevitable transition an orderly and smooth one.”

Perhaps these questions are the report’s most strikingly contemporary feature, still relevant for procrastinators like us today.