Michigan farms among those most at risk from wild bee decline, study shows

Seven agriculture-heavy Michigan counties are among the nation’s most likely to be impacted by the loss of native pollinators, according to the first study to map wild bees in the United States.

Both honeybees and wild pollinator populations are shrinking, a trend that’s been linked to habitat loss, parasites, pathogens, pesticide exposure, climate change and other factors. A global assessment of pollinators published last February found a growing number of them threatened with extinction.

Scientists say more than $3 billion of the country’s agriculture economy depends on the free services provided by native pollinators, including more than 4,000 species of wild bees. That’s on top of the $15 billion impact from European honeybees raised to pollinate crops and produce honey.

The study, led by the University of Vermont with contributions from Michigan State and other universities, paired expert knowledge with models of land-cover 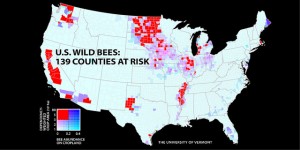 change to estimate that wild bee abundance in the contiguous U.S. decreased by 23 percent from 2008 to 2013. The results also show that 39 percent of croplands that depend on pollinators face a widening gap between the demand for pollination and the supply of wild bees, suggesting that successful future harvests in those areas may depend more and more on managed honeybees.

“The shortfall is most dramatic in areas that focus on specialty crops like apples and berries, which are especially reliant on pollinators,” the Christian Science Monitor reported. That’s particularly worrisome news for Michigan growers, who produce the country’s second-most diverse array of food, including many pollinator-dependent specialty crops. END_OF_DOCUMENT_TOKEN_TO_BE_REPLACED

With spring in the air, MEC is shaping a plan to protect pollinators

Editor’s note: This post is by MEC intern Teha Ames.

A serious problem that should not be overlooked by the state of Michigan and its residents is the decline of pollinator populations.  Pollinators include bees, butterflies, beetles, hummingbirds and other animals that help flowering plants reproduce by transferring pollen from plant to plant. Pollinator population declines have been linked to habitat loss, parasites, pathogens, pesticide exposure, climate change and other factors. A global assessment of pollinators published in February found a growing number of pollinators are threatened with extinction.

The services pollinators provide are essential for feeding the world and for supporting agricultural jobs. In 2014, President Obama issued a memorandum highlighting why honey bees and other pollinators are important in the United States. “Honey bee pollination alone adds more than $15 billion in value to agricultural crops each year in the United States,” it noted. The memorandum also established a Pollinator Health Task Force between several government agencies to combat the problem. In its 2015 strategy to protect pollinators, the task force laid out three clear nationwide goals: reduce honey bee colony losses during winter to no more than 15 percent within 10 years; increase the eastern population of monarch butterflies (which includes Michigan’s monarchs) to 225 million by 2020; and restore or enhance 7 million acres of land for pollinators over the next 5 years.

Since Obama issued the memorandum, several states have joined the fight for pollinator protection. One state that has not created a pollinator protection plan yet is Michigan. Fortunately, MEC and other supporting stakeholders are helping the Michigan Department of Agriculture and Rural Development to create such a plan. 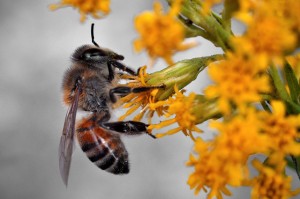 END_OF_DOCUMENT_TOKEN_TO_BE_REPLACED

A new loan and grant fund aims to improve public health and drive economic growth in Michigan by expanding access to healthy food in underserved communities.

The Michigan Good Food Fund, a public-private partnership launched in June, will provide funding to food producers, distributors, processors and retailers, who are often overlooked by traditional banks. The fund’s supporters say the loans and grants are an important step toward decreasing obesity rates among the 1.8 million Michiganders—including 300,000 children—who live in communities with limited access to healthy food.

The fund’s core contributors are Fair Food Network, Michigan State University Center for Regional Food Systems, W.K Kellogg Foundation and Capital Impact Partners. By 2020, the partners plan to raise $30 million for the fund and ensure that 80 percent of residents have healthy food options, with 20 percent of the food consumed in Michigan sourced from within the state.

The fund is a positive step that is well-aligned with efforts by the Michigan Environmental Council and the Healthy Kids Healthy Michigan coalition to reduce childhood obesity, said Tina Reynolds, MEC health policy director.

“We will work alongside partners from the American Heart Association who are trying to put together state dollars to help seed the fund,” Reynolds said. “We will be involved with legislative meetings, education and outreach, and engaging key members of the Legislature to support these dollars.” END_OF_DOCUMENT_TOKEN_TO_BE_REPLACED

Visiting a state park this weekend? We need your help!

Many Michigan families and visitors from other states will enjoy fireworks and festivities this holiday weekend at one of Michigan’s 102 state parks.

Those campers will eat a lot of junk food. And that’s fine – part of the fun of camping is indulging in plenty of chips, pop, hot dogs and s’mores.

But many people also visit the state parks to enjoy healthy physical activity and outdoor adventures like biking, swimming and kayaking. And those folks often want to refuel with more nutritious food choices.

That’s why MEC and our partners in the Healthy Kids, Healthy Michigan coalition recently commissioned a study of the food offerings from vendors at state parks. Michigan State University researchers visited a sampling of parks to see what items were available from camp stores, concession stands and vending machines. They also surveyed park visitors to find out what they think about the available food options. END_OF_DOCUMENT_TOKEN_TO_BE_REPLACED

At the Michigan Environmental Council we’re willing to do just about anything to help the environment. And if that means drinking a locally crafted beer or glass of Michigan wine, then so be it!

This Friday in Lansing we’re inviting you to a celebration of local beer, wine and spirits at our Green Drinks Lansing event. Admission is free, it’s informal, and there is a trio of fascinating experts lined up to share their wisdom. (More details below).

One thing I really appreciate about MEC is that when we host an event or meeting, local food, drinks and vegetarian options are all taken into consideration. Environmentally friendly and socially responsible vendors are always the first choice and often are a requirement. I appreciate that. It’s walking the talk. What’s more, it really does make any event better, creates a sense of shared camaraderie in local choices, and helps support Michigan’s economy. Win-win-win.

Plus, let’s be honest – most environmentalists are craft beer snobs. And with good reason.