The Michigan Environmental Council joined more than 30 advocates at the State Capitol yesterday to educate lawmakers about the dangers of lead poisoning and the urgent need to maintain the state’s current funding for removing lead hazards from homes.

It was the fourth Lead Education Day organized by the Michigan Alliance for Lead Safe Homes. MEC is part of the leadership team for MIALSH, which includes public health agencies, lead-affected families, lead contractors and inspectors, environmental health organizations and the landlord community, among others.

Since its formation in 2010, the MIALSH coalition has been successful in educating legislators about lead hazards and advocating for state investment in lead abatement. Thanks to those efforts, the fiscal year 2014 state budget for the first time included $1.25 million set aside for lead cleanups in homes. MIALSH successfully increased that funding to $1.75 million for the 2015 budget year. 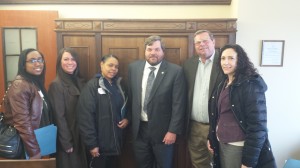 “At our first education day, many of the lawmakers we met with were unaware that, even though lead was phased out of paint and gasoline, Michigan’s housing stock still contains a lot of residual lead, and lead poisoning is still a serious problem,” said Tina Reynolds, MEC health policy director and a MIALSH leader. “Term limits mean there’s a lot of turnover in the Legislature and there’s always more education to do, but in general it feels like our messages are sinking in. Once they understand the problem, legislators find lead poisoning unacceptable, and they’re supportive of our coalition’s efforts.”

Gov. Rick Snyder’s budget proposal for the 2016 fiscal year maintains the $1.75 million for lead programs, but protecting that funding from cuts as the budget moves through legislative committees will require that lawmakers understand the impact of lead poisoning in their districts.

While yesterday’s meetings were strictly educational and did not involve advocating for specific policies, MIALSH representatives presented more than 40 members of the House and Senate with important information to understand the scope of the lead problem and the fact that it is 100 percent preventable.

Among the key messages they delivered: The 2014 funding made possible inspection and lead removal in 122 homes, far exceeding the stated goal of 80 homes. Those dollars not only created a safe environment for hundreds of Michigan children, but also provided job opportunities for more than 15 lead abatement contractors.

“Frankly, $1.75 million is just the tip of the iceberg in terms of what’s needed to really address this problem,” Reynolds said. “Still, it’s very encouraging to see the progress we’ve made in just a few short years, and we’re so grateful to the members of the Legislature who are stepping up to make lead poisoning a thing of the past in Michigan.”