Transportation funding: An exciting future is within reach Editor’s note: This is the third and final post in a series on transportation funding leading up to the May 5 special election. Read the previous installments here and here.

A lot of what you’ve read about Proposal 1 has probably been about the price Michigan is paying today for our history of inadequately funding our transportation system. Past mistakes—like our flat-rate fuel tax that hasn’t kept pace with inflation—have left us with roads so bad that many local governments are opting to turn them back into gravel, and “structurally deficient” bridges that, in some cases, you can see right through.

It’s all been pretty gloomy. That’s why we wanted to end this series on a hopeful note by offering some glimpses of what Michigan’s transportation future can look like if voters approve Proposal 1. Yes, it will take some time to address the backlog of projects needed to get our infrastructure back in decent shape. But before long, the new funding will support exciting projects that will ultimately add up to the 21st-century transportation system Michigan needs.

Roads and bridges are crucial pieces of that system, no doubt. But MEC’s transportation focus is on the environmental, social and economic benefits Michigan will enjoy from improved and expanded passenger rail, public transit and complete streets that address the needs of all users. If Proposal 1 passes, those pillars of our transportation system will see a $116 million annual funding increase.

That sure sounds like a lot, but what does $116 million really get us? Well, to put it in context, the entire startup cost of the planned WALLY commuter rail line from Howell to Ann Arbor is $30 million, plus about $5 million a year to operate the service. The influx of new funding will help get WALLY and similar projects off the ground sooner by providing the matching funds needed to unlock significant federal grants.

Of course, public transportation has a lot of catching up to do in Michigan, since it hasn’t seen a structural funding increase in nearly three decades. Like our roads, public transportation is crumbling in many communities. Some local bus agencies are reducing service and even eliminating routes.  So in addition to launching new projects, Proposal 1 would strengthen the foundation of our public transportation network with basic improvements to existing services. A large portion of the new revenue would support local bus operating expenses, which could mean that transit service in your community extends service hours, increases frequency or provides additional route options.

That’s important, because people all over Michigan depend on public transit to accomplish the basic tasks of daily life. It’s how many rural residents get to the grocery store. Seniors and people with disabilities take buses to the doctor’s office or to visit family members. In some urban districts, public buses are the only way for kids to get to school. Without transit, many of our friends and neighbors couldn’t get to the college classes or job interviews that will bring their families new possibilities and stability. The 260,000 rides Michiganders take on public transit every day are essential gateways to opportunity for economic advancement. 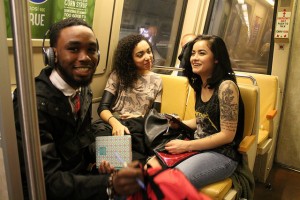 On track to prosperity

The benefits of these investments will extend beyond the day-to-day convenience and access to opportunities they provide for millions of Michiganders, though such benefits are significant. Whether or not we build a modern, complete transportation system will be a deciding factor in Michigan’s economic competitiveness. Report after report tells us that Americans across all age groups are looking for more and better options for getting around. Millennials are getting their licenses and owning cars at ever-decreasing rates. Baby boomers are rethinking the auto-centric lifestyle they grew up with and moving away from car-reliant suburbs. Cultural shifts among these two huge demographic groups demand that we think about our transportation system in a more comprehensive way if we want to attract and retain talent and improve quality of life for everyone.

These changes also mean that investing in transit and making our communities more walkable and bikeable is simply good economics. For example, the Minneapolis-St. Paul area saw $2.5 billion in development—121 projects along an 11-mile corridor—before their new light rail line even opened. Even more striking, Cleveland’s economy is basking in $5.8 billion in new development along its seven-mile HealthLine Bus Rapid Transit (BRT) line. The city has leveraged a stunning $115 return for every dollar spent on BRT infrastructure.

These communities and many others are quickly learning that investing in transit—and using it to connect neighborhoods where walking and biking are safe and accessible—opens up a world of opportunity for sustainable economic development. And while Michigan may be playing catch-up, we already are benefiting from what transit we have. Our urban and rural bus systems are responsible for $1.3 billion in economic output and $804 million in social benefits each year, according to a study by the Michigan Department of Transportation. Amtrak’s increasingly popular Michigan services also pay huge dividendsto the tune of $62 million a year in community benefits to cities and towns along their routes.

The quality-of-life benefits of a complete, balanced transportation system also are noteworthy. A study by the Victoria Transport Policy Institute found that, compared to residents of communities with automobile-focused transportation systems, people who live in communities with high-quality public transportation and safe walking and biking infrastructure have lower traffic fatality rates; are physically healthier and less likely to be obese; breathe cleaner air; have lower stress; and enjoy greater financial freedom. Those sound to us like great places to live. Detroit's Dequindre Cut is a popular walking and biking pathway.

There’s also something less tangible about the prospect of 21st-century transportation in Michigan—call it the cool factor—that we think makes a compelling case for new investment.

Imagine boarding a train in Ann Arbor for a long weekend getaway in Traverse City. Along the way you can read a book, watch a movie, chat with fellow passengers or just take in beautiful Michigan scenery. Get up and stretch your legs anytime. Traffic is not a concern. In effect, your vacation will start a few hours early.

Live in Ann Arbor and work in Detroit? Or commute from Howell to Ann Arbor? Maybe your family can get rid of that second car payment when commuter rail between those cities becomes a reality. You’ll save money and avoid the daily stress driving to and from work. On the way in, you can read the paper or get an early start on responding to emails. On the way home, pop in the ear buds, put on your chill-out playlist, close your eyes and unwind.

How about passenger rail service linking Michigan’s coasts via our largest cities? Young professionals and college students can take the train to Holland for a Saturday on the beach. Entrepreneurs from Grand Rapids can catch the morning train to a meeting with investors in Lansing and update their business plan on the ride home. Ann Arbor couples can hop a train to Detroit for dinner with friends or a Tigers game.

Add to the mix some improvements to the fundamentals—smooth roads, safe bike lanes, and public buses that get Michiganders where they’re going reliably and conveniently—and you’ve got a transportation system to be proud of.

It’s an exciting future, and one that is well within reach. But to get there, we need to provide our transportation system with the funding it needs.

Voting yes on Proposal 1 is the only sure way to get there.