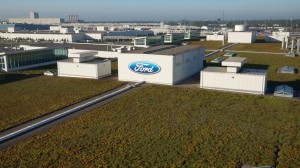 Stormwater runoff is a major source of pollution in our waterways. The sediment, nutrients and chemicals that are introduced to our lakes and streams from stormwater are hurting fish populations and affecting human health and safety.

The cause of this runoff is the mass amount of impervious surface in our cities, approximately 15 percent of Southeast Michigan is covered with impervious surface, mostly pavement. We have attempted to remove water from our properties and streets and funnel it to treatment plants, without realizing that nature had been diverting and treating stormwater for millennia. The green infrastructure movement is all about getting our modern day infrastructure and technology to do what nature always did before we altered it.

What makes infrastructure green is not some advanced technology. It is instead simply a new way of thinking about an old problem. The old design of storm drains and pipes that pushed stormwater to the nearest body of water simply made those bodies of water unfit for human use. Prior to human intervention in the process, most rain was absorbed into the ground and filtered through the earth to recharge groundwater, or filtered through a wetland before draining, clean, into a main body of water. Green infrastructure is designed to put water through that process again. This means fewer pipes and impervious surfaces, and more rain gardens and permeable pavement.

Many companies and municipalities are already making a commitment to green infrastructure. While at the Department of Environmental Quality’s Northern Michigan Green Infrastructure Conference this month, I had the opportunity to tour two such projects and hear about many more. The first example is Cherry Capital Foods. This large distributor of Michigan-made foods purchased an old hockey arena and has since turned it into a green building, including a focus on reusing parts of the old arena. Cherry Capital also included a green roof as part of its design for the building. A green roof takes the water that would normally run off a shingled roof and instead retains it inside plant beds that utilize the water. They also can last significantly longer than a conventional roof, as no water touches the roof surface to degrade it. As long as the plant beds are maintained, little to no storm water runs off the roof. (At 10.4 acres, Ford Motor Co.’s green roof, pictured above, is among the largest in the world.)

The 18 rain gardens installed by the City of Suttons Bay, just north of Traverse City, are another example of green infrastructure. Using a Great Lakes Restoration Initiative grant, the Watershed Center Grand Traverse Bay installed rain gardens and interceptor pipes in most of the city. These gardens are simply dug-out areas that collect stormwater, which plants then take up. Any overflow goes into interceptor trenches. Ultimately, a majority of the water not absorbed by the rain gardens is sent to a coastal wetland, after going through a small pre-treatment pond where large sediments can settle out. Other early adopters of green infrastructure in Michigan include Meijer stores, the City of Ann Arbor, and the City of Sault Ste. Marie. 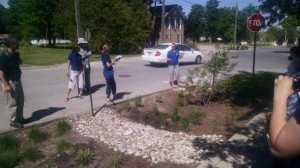 A rain garden in Suttons Bay

Green infrastructure is one of the cheapest and most efficient ways to help protect our limited freshwater resources. The idea is catching on, from simple things like rain gardens and green roofs, to more advanced projects such as taking streams out of the pipes we have put them in and letting them flow free, and turning old landfills into useful green spaces.

From: land use, water protection