What began three years ago in the classrooms of Detroit’s Denby High School—and the imaginations of its students—took a major step toward becoming reality this week.

Students, community organizations and business leaders gathered Monday for the official kickoff of a $1.5 million transformation of the unused playfield next to the school into a green space and community gathering place to be called Skinner Park.

When complete, the park will offer something for everyone. Replete with basketball and volleyball courts, a performing arts pavilion, and a putting green, the plan also includes several features to make the neighborhood more resilient and sustainable, including community vegetable gardens, a fruit orchard and a rainwater catchment system.

Life Remodeled, a Detroit nonprofit that recruits a huge volunteer workforce to revitalize a troubled city neighborhood each year, has selected Skinner Park and the surrounding Denby community as its focus for this summer. Along with work in the park, thousands of volunteers will remove blight and beautify 300 city blocks, renovate 50 homes and chart safe pathways to school, among other activities planned for August 1-6. (Please consider signing up to be part of the volunteer workforce in the Denby neighborhood! You can register here.)

The Skinner Park renovation marks a significant milestone in a long-term project that challenges students to confront the city’s challenges and collaborate with local residents to make transformative improvements to their neighborhood.

The project was hatched in the 2013-2014 school year, when Denby students proposed focusing a required senior capstone project on the Detroit Future City (DFC) framework, which aims to stabilize neighborhoods, repurpose vacant land and put more Detroiters to work, among other goals.

Sandra Turner-Handy, MEC’s community engagement director, a Denby neighborhood resident and a DFC leader, was called in to guide seniors in understanding and implementing the framework and has been deeply committed to the project ever since. She leads the Denby Neighborhood Alliance—an intergenerational, student-and-resident collaboration for planning and action—and is known affectionately by students as “Mama Sandra.”

As Life Remodeled says in an outline of its work plan for Denby,

Sandra Turner-Handy is a pillar of hope in the Denby community, and she has passionately and successfully rallied community support for this project since it was first designed by Denby students in 2013. Sandra lives, breathes and bleeds Denby. While she proudly raised her own children in the community, she never allowed them to play in a local park because it lacked attractive amenities and was perceived to be unsafe. Skinner Park will address both issues and transform perceptions.

Since Denby’s class of 2014 proposed the renovation of Skinner Playfield, which is adjacent to the school, students and the Denby Neighborhood Alliance have been working to make it a reality. Those efforts got a major boost when Life Remodeled caught wind of the plans and committed to helping line up the capital, in-kind contributions and massive volunteer army that will transform the community this summer.

With generous support from the Kresge Foundation, Sandra and partners will also be working this summer to expand the project’s in-school elements beyond the senior class.  This fall, they plan to engage every grade level with instruction ranging from the ways Detroit’s history has shaped its present realities to the science of growing fruits and vegetables and the business of marketing what they produce.

With the entire student body engaged in the creative thinking, Denby High School will serve as a pipeline of ideas to chart a prosperous future for the neighborhood. Project leaders see the park renovation as just the start of more good things to come.

Sandra was among the speakers at Monday’s launch event for Skinner Park, and emphasized how proud she is of the vision, energy and leadership Denby’s students have put into improving their community. 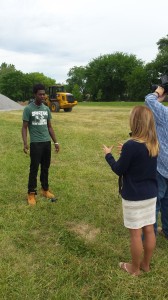 “The thing is, young people — better than all of us — have a vision of where they want this city to go,” she told the Detroit News.

Another speaker at the event was Hakeem Weatherspoon, a 2014 Denby graduate who is interning this summer with MEC and Life Remodeled. Hakeem has become an enthusiastic spokesperson for the Denby neighborhood and for Detroit. He spoke Monday with the Detroit News and two local TV news outlets, and was even the subject of a recent video profile by the New York Times.

“When you look good, you do good,” Hakeem told the crowd, explaining his belief that removing blight and beautifying the community are important steps toward improving the quality of life there.

Hakeem also said he is inspired by the contributions of labor and materials pouring into the Denby neighborhood. “Every hand is a helping hand,” he said.