Posts from the ‘water protection’ Category Or maybe it's Leelanau's grapes?

Michigan’s Leelanau County is at the top of the list of the state’s healthiest counties,  according to a recent study by the University of Wisconsin Population Health Institute and the Robert Wood Johnson Foundation. Parts of Southeast Michigan, the Grand Traverse area and West Michigan seemed to house most of the healthiest counties; check out where your county landed in the study. Do you think Leelanau’s ranking had anything to do with its utterly refreshingly lack of fast food restaurants?

Farther North yet, the Christian Science Monitor has surveyed the imminent mining boom in Michigan’s Upper Peninsula with this reporting. The otherwise even-handed piece fails to note that the current type of mining is much different and riskier than the mining of the U.P.’s past. So-called sulfide mining is a explained here.

Moving into urban issues, the historic River Rouge coal plant was the largest of its kind on earth when it opened in 1956. Mother Jones has a terrific photographic essay on the aging plant’s visual legacy. Scroll down the photos far enough to see the Sierra Club’s indefatiguable Rhonda Anderson, along with a good analysis of how her organization (an MEC member and ally) is working not just to replace the behemoth with cleaner energy, but help the community better absorb the loss of jobs the plant’s closure will create.

One of the state’s most invisible environmental challenges are the thousands of leaking underground petroleum tanks across the state. These sites threaten drinking water, surface water, soils and in some cases public health. Here’s the first in a Bridge Magazine series done by Michigan journalist and author Jeff Alexander. He explains how if the state does not act decisively, the problem will only get more costly.

Hey, there’s good news too: The Federal Government and five states, including Michigan, have come to an agreement to expedite the process of building off-shore wind farms around the Great Lakes region.

Finally, under the heading clean technology, some crazy Belgian is trying make pigeons poop soap, to help clean the cities they now soil. MEC has no position on soap-pooping pigeons.

Next let’s visit our neighbors down south…you know, the ones we grudgingly sharedone-third of our Big Ten men’s basketball championship with this year. 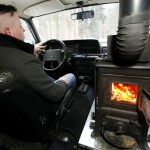 Don't try this at home

They’re wrestling overhow much unregulated water users should be able to siphon from Lake Erie and its tributaries. We defer to our friends at the Ohio Environmental Council who say the proposal is getting better, but isn’t good enough. Oh, and see you in the Big Dance, Buckeyes!

Down in Brooklyn, MI, home of Pumpkin Quest (!), people turned out for a discussion on the rewards and risks of a new and more intensive wave of fracking in Michigan. MEC’s James Clift was a panelist, though he didn’t make this radio station’s audio clip report that included State Rep. Mike Shirkey, who organized the forum.

Up north, MEC ally and member group Michigan Land Use Institute has this excellent story on Consumers Energy’s solar lottery. Twice as many people applied for the program as there were slots. We think we should let more people participate, and the 25×25 ballot issue will be the way to do it. Or, we could just throw our burgeoning renewable energy industry under the bus like State Rep. Ray Franz would do.

In weather news …… WHASSSUP Springtime??!! MEC has two beekeepers in the office, and their girls were happy with the mild winter. But the loss of ice cover on the Great Lakes – 79 percent over 38 years – is no small matter. Also, we may see more nasty insects this summer as a result. Hey, maybe Grist is right and a climate change conspiracy theorists make no %$#!!& sense.

Finally, in the “we can’t make this stuff up” category, here are two things MEC is not staking out a position on:  This lunatic with a wood stove heater in his Volvo, and these people who are fertilizing soybeans with urine.

Have a good weekend, and don’t forget to spring ahead!

A new mining era is dawning in the Upper Peninsula. At least five big operations are getting underway or entering the permitting process, and maybe half a dozen more are busily exploring and testing the waters for future mines.

The Michigan Environmental Council opposed the first of these mines – London-based Rio Tinto’s Eagle Project in the Yellow Dog Watershed near Big Bay. We believe state regulators have not been rigorous in enforcing the state’s mining laws that were developed specifically to protect Michigan’s waters and public health from this particular type of mining.

We will continue to watchdog each new permit. However it’s clear that these operations —environmentally risky as they are—are going forward. They enjoy strong support from Governor Snyder, Northern Michigan lawmakers and state agency staff.