Today was a big day in the ongoing effort to protect our fisheries and fresh water by keeping factory fish farming out of the Great Lakes.

MEC was among numerous environmental, conservation and angling groups and concerned citizens at the hearing to speak out in favor of banning commercial aquaculture in the Great Lakes. Only one person—who happens to have a financial stake in a proposed fish farm—testified against the ban.

And at a noon press conference, Sean joined Rep. Bumstead, Sen. Jones and Dan Eichinger, executive director of Michigan United Conservation Clubs, in releasing the results of an EPIC-MRA poll showing that nearly 7 in 10 Michiganders oppose allowing fish farms in our Great Lakes. The opposition cut across geographic, political and geographic lines and—here’s the kicker—grew stronger when survey participants heard arguments from both sides of the issue. 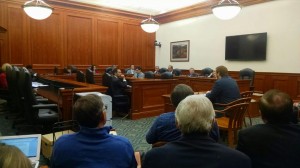 You can read more about the poll in our press release.

As we’ve written here before, proposals to open the Great Lakes to net-pen aquaculture—which involves cramming thousands of fish into floating cages and fattening them on food pellets—pose a serious risk to fish populations, water quality and the recreational value of our greatest natural resource. Among other concerns, fish farms would introduce the threat of disease transmission from farmed fish to wild populations and concentrate huge amounts of fish waste in bays and harbors, potentially triggering toxic algae outbreaks.

To get up to speed on our concerns about Great Lakes fish farming, read more here, here, here and here.

It’s important to note that MEC and our partners support aquaculture done the right way, and hope to see that industry thrive in Michigan. Contained, land-based systems that properly manage fish waste are a welcome and sustainable source of good, local food. But Michigan residents shouldn’t be forced to subsidize the abuse of our Great Lakes by letting companies use our shared water as a sewer. Especially not when the proposed fish farms would create—at best—just 44 jobs.

We appreciate the leadership shown by Sen. Jones and Rep. Bumstead, and we’re confident we will achieve the right outcome for the Great Lakes.

But this is far from a slam dunk. On Wednesday, in fact, Sean will testify once again—this time in front of the House Agriculture Committee—to oppose a set of bills that would lay out the welcome mat for high-risk Great Lakes aquaculture. And we’ll be there when the natural resources committee continues taking testimony next week on the proposed ban.

Now would be a great time to pick up the phone and let your state legislators know where you stand. You can find your representative here and your senator here.

Since there are multiple bills on both sides of the issue, let’s keep the message simple: Net-pen fish farms are all risk and no reward for Michigan, and the Legislature should act now to keep them out of the Great Lakes.

Thank you for helping urge state leaders to live up to their role as stewards of the greatest freshwater resource on Earth. Together, we’ll chalk up a crucial win for the Great Lakes.