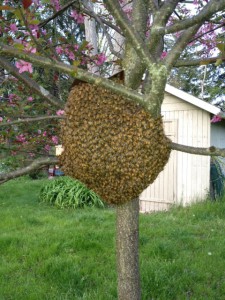 This honeybee swarm in a residential neighborhood is terrifying, unless you know a bit about honeybees. I learned from the wise old hands from the Southeastern Michigan Beekeepers Association who taught me and several dozen other newbie classmates the ancient art and science of this fascinating trade/hobby last year.

But nothing could fully prepare me for the chaotic Sunday evening of trying to “capture” this swarm after the property owner breathlessly called me to her back yard. For a veteran beekeeper it would be a routine event. For me – and my brave wife Karen who accompanied me – it was a thrill, a first, and a learning experience filled with mistakes, stings, and the surreal moment when I realized bees were inside my protective face veil!

But we’re getting ahead of ourselves. The sun was setting when the woman called. I was able to assure her that a swarm is very docile and non-aggressive. In fact, honeybees are among the least aggressive stinging insects, often and unfairly confused with their nastier relatives, wasps and hornets. A honeybee hive in your neighborhood helps out-compete the meaner and more easily provoked nuisances.

Commercial beekeepers truck their hives around the country and get paid by farmers to let them pollinate their crops. No bees, no almonds, and not many cherries. Life without almonds or cherries would be unimaginably drab.

Honey also has antibacterial and other healing properties that may include protection against pollen allergies.

The health of the nation’s honey bees is not good, probably as a result of the stress we put on them using nasty pesticides and other chemicals. Trucking them cross country all year doesn’t help.

Anyway, I arrived, sized up the situation, and called my friend and colleague, MEC Deputy Policy Director Tim Fischer. Beekeeping is in Tim’s blood. His father, grandfather, great-grandfather and great-great-grandfather kept bees.

Before trying a capture, I needed to ask Tim a few technical questions that are probably too esoteric to make much sense to you. I’ll paraphrase: “Tim, this is Hugh, I’m in my neighborhood where there’s a huge swarm here and it’s getting dark and I’ve never done this and I’m SCARED  and there are SO VERY MANY of them and they’re BUZZING  and FOR THE LOVE OF GOD what the hell am I supposed TO DO???!!!!

Well, he talked me down, and we agreed on a plan.

As dark settled in I assembled a makeshift mini-hive under the cluster, got fully suited up and carried some gear to the scene. Carefully, I used pruning snips to cut the branch holding a birdhouse that was completely enveloped by bees, and moved the birdhouse – bees and all – into the hive body. That got the bees buzzing, but three-quarters of them were still clumped on the tree.

It was when I began brushing the remaining bees into a bucket that they really got pissed. I filled the 5-gallon bucket probably one-third full of clumped bees and dumped them into the hive. Several more buckets-full later, the yard was swarming with confused bees. They were clumped on the ground, still clumped in parts of the tree and clung to every surface of my bee suit. A handful of worker bees had identified the threat and were banging off my face veil at full bore over and over and over. They were, I presumed, the best and the brightest. The Seal Team Six of the swarm.

With 80 percent of the bees in or on the new hive, chances were good I had the queen. And, if she were in the hive and uninjured, the rest should follow her in.

But when I knelt to cover the hive I got stung in the back of the calf – my first in a year of beekeeping. It was, to be honest, a bit of a relief. A beekeeper who’s never been stung is suspect. A fraud. And probably a wimp. At least that’s what Tim tells me.

You can watch video here, with my first sting near the end of the 3-minute clip.

It hurt, and as I retreated I was stung again in the throat, and suddenly I realized there were bees inside my suit. I’d read about this and heard it from other keepers. But there’s nothing to prepare you for having trapped bees buzzing near your eyes, ears and mouth.

I can’t remember running, but I must have. In any event, I unzipped the suit and stripped. The bees were inside my jeans, too, so those came off, as did my shirt, my boots, and my socks. I ran into the woman’s garage and slammed the door. It was not an evening for modesty.

Later, the yard resembled a crime scene. A trail of clothes and beekeeping equipment at the end of which was my headlamp, flashing rhythmically in the grass. Beside it, my shirt that reads “Caution, Beekeeper. If you see me running, try to keep up!” It was coincidence I had that shirt on that evening, and made for a good laugh.

But I had the swarm, somewhat confined in a new, albeit temporary, home.

Two days later, a veteran beekeeper came and transferred the bees to a nuc (nucleus) box – a small, temporary hive ideal for storing swarms and holding them until they can be moved to a real hive. At night, with all the bees inside, he sealed the box and took it home.

In a few weeks, he predicted, the queen would be rearing young and the frames would be laden with honey. He could sell the colony for $60, $80 or even $100.

But a day later he called. He’d been gone for a day. When he returned, the box was empty. Our bees apparently had decided to venture forth yet again in search of a better home.

Godspeed, honeybees. And thanks for the experience!