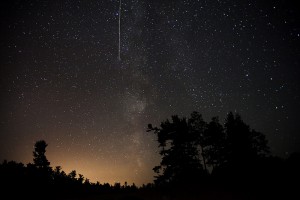 A piece on Wired.com caught our attention last week because it has something to do with a wild and beautiful corner of Michigan.

It’s a Q&A with journalist Paul Bogard, author of a new book called The End of Night: Searching for Darkness in an Age of Artificial Light.

Astronomers say people should be able to see about 2,500 stars with the naked eye on a clear night, but in most suburbs only 200-300 are visible. In large cities you might see a dozen stars. As many as 80 percent of people have never seen the Milky Way, by one estimate. The reason is light pollution.

We need lights at night, of course. But dark-sky advocates say about a third of outdoor lighting spills outward or up into the sky—a waste of energy that dims the stars and costs the United States upward of a billion dollars each year, according to the International Dark-Sky Association (IDA).

There are other costs, according to Bogard. The increase of artificial light harms nocturnal animals and may contribute to some health problems in humans, he noted. He also discussed the psychological importance of dark skies where stars shine bright:

When we can’t see the sky, it’s tempting to think we’re the most important thing, that there isn’t a universe out there that dwarfs us.

When you have that firsthand, it can make you feel small, but it can make you grateful for what we have here, too. You realize the beauty we have on Earth is tremendous, and there’s no other place to go. The night sky makes this clear.

Conserving the night sky is the goal of the IDA, which so far has designated 10 International Dark Sky Parks around the world. The parks, which the association says “are home to some of the darkest and most pristine skies in the world,” are meant to show people what the night sky ought to look like and motivate them to help fight light pollution.

Among them is Headlands International Dark Sky Park, a 600-acre stretch of Lake Michigan shore in Emmet County, just southwest of the Mackinac Bridge.

Fellow Michiganders, take a minute to put that feather in your cap and strut around the room a time or two: Michigan has one of only ten dark sky parks on the planet. It’s one of the many powerful places that make Michigan such a wonderful state to live in and—as long as we take good care of them—will keep our tourism economy bustling for generations to come.

For an idea of what we’re talking about here, check out this video of the night sky in northern Michigan, some of which was shot at the Headlands. (A hat tip to Shawn Malone for allowing us to use her incredible images. For more of her work, click here.)

For some background on the park, check out a recent Traverse Magazine profile of Mary Stewart Adams, who was the driving force behind its 2011 creation and now is its director.

And if you’re looking for a fall getaway, there are still programs on the park’s 2013 events calendar. Who’s up for a spooky Halloween celebration under a bright dome of stars?

From: conservation, land use, Uncategorized
5 Comments