When thousands of bats overran the campus of Maryville College in Tennessee earlier this fall, the college needed help. Fast.

It was Michigan to the rescue. More precisely, experts from the internationally renowned Organization for Bat Conservation (OBC) based at the Cranbrook Institute of Science in Bloomfield Hills.

Maryville’s plague of Big Brown bats was unleashed after the college tore down their home – the rafters of an iconic bell tower on a campus building. “They displaced them humanely, but the bats didn’t go far,” said OBC Executive Director Rob Mies. “So they were getting into buildings, flying around in classrooms ….” Even Bluegrass musician Ricky Skaggs – performing on campus – contended with bats swooping through the stage spotlights during his show.

Mies executed an emergency relocation of the bats – providing temporary bat house homes. For a long-term solution, he will help the college build a clone of the original rafters that the bats will move into spring 2014. 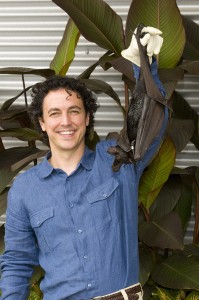 It’s all part the job for the little Michigan nonprofit that can, which travels across the globe to research, educate and protect the planet’s only flying mammals. Rob, his wife Eva Meade, and a band of loyal staffers and volunteers conduct educational programs, work with national and international conservation initiatives, and strive to protect bats from threats like the invasive white-nose syndrome fungus and poorly sited wind turbines. Rob has brought bats to visit Ellen Degeneres, Martha Stewart, Conan O’Brien, and shows from National Geographic specials to FOX Detroit television.  Hundreds of thousands of school kids, civic groups, and educators from dozens of states and nations have been introduced to bats through OBC’s work.

All this effort is not just for the bats’ sake. And not just because they are adorable (well, yes they are actually!)

Bats provide irreplaceable free labor for farmers and mosquito haters. They pollinate crops and plants and eat up to 5,000 mosquitoes and other insects nightly per bat! That displaces billions of dollars worth of toxic pesticides that might otherwise be used to control the bugs, numerous analyses have concluded. And the saliva of the vampire bat contains a powerful drug that is used for the treatment of blood-clotting diseases!

The OBC works tirelessly to spread these positive messages about bats to a public that too often buys into the many myths about the dangers of these fascinating creatures. At the same time, the observations and data gathered from the Organization for Bat Conservation is helping add to a growing body of research on bats.

Visiting researchers study bat behavior, social interactions, and how bats communicate, play, and react to stimuli. They even play music for the captive bats. “They react differently depending on the music,” explained one volunteer. “Country music, the Beatles … they have distinctly different reactions.”

For more information or to plan a visit to this unique and exciting Michigan organization, go here, or call (248) 645-3232.