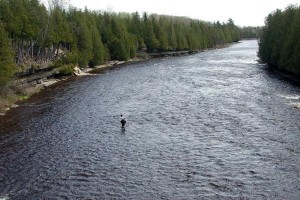 Welcome to the weekend!

Whatever you have planned, it looks like the weather will be fantastic. Plus, meteors! Before you ask the boss if you can leave early, take a minute to review a few of the environmental stories that caught our eye this week.

Algae. The biggest environmental story in a while, of course, was Toledo’s drinking water crisis. The week began with Mayor D. Michael Collins toasting the half-million people—including some southeast Michigan residents—who endured a weekend without usable tap water after the city’s water supply was contaminated with toxic blue-green algae.

The algae blooms are nothing new, and by now most of us know the story:  Fed by excess phosphorus, they plagued Lake Erie in the 1960s and ‘70s but largely disappeared after public outcry led to sewage treatment upgrades and restrictions on phosphorus in detergents. In recent years, though, the blooms have again become an unwelcome annual visitor.

As Salon magazine pointed out in a boldly headlined story, climate change is likely a contributing factor. Longer, hotter summers help the algae grow, and more intense rains dump huge gulps of nutrient pollution into waterways.  The root cause, however, is an all-you-can-eat buffet of phosphorus from failing sewage treatment plants and industrial farms and feedlots.

The drinking water ban may have ended, but the algae blooms will persist without strong measures to limit nutrient runoff from agriculture. As a University of Toledo researcher noted, the city’s water crisis should become a galvanizing moment for protecting the Great Lakes.

Transit. Tuesday’s primary ballot in several Michigan communities included millage proposals for public transportation. The results not only showed overwhelming support for transit, but also underscored the fact that public transportation is as much a rural issue as an urban one. Coincidentally, Bridge Magazine on Tuesday had an eye-opening story about rural poverty in Michigan that further drove home the importance of public transportation for isolated residents. “Transportation is a huge problem,” a University of Michigan social work professor told Bridge. “If you don’t have a car, it’s pretty tough to get around.”

Birds. This week also brought disturbing echoes of the “Silent Spring” era with news reports that robins and other birds in St. Louis, Michigan, have been falling from the sky and dying, poisoned by the insecticide DDT. A Michigan State University researcher who sampled DDT concentrations in birds collected at the site found “some of the highest-ever recorded levels in wild birds.”

The mid-Michigan town is the former site of a Velsicol Chemical plant that produced DDT and other chemicals—including the flame retardant PBB, which in 1973 was mixed into cattle feedat the plant—before the U.S. EPA took over the site in the ‘80s. In a follow-up story, the EPA told Environmental Health News that St. Louis residents—who have lived with contaminated property for decades—are in no danger and can stay put during an ongoing cleanup process. But health experts said there is no safe level of exposure to DDT.

Fly-fishing. In much happier news, Field and Stream this week confirmed what Michigan anglers already know: Our state is tops for fly-fishing. The magazine’s “Fly Talk” blog in 2011 gave us the number one spot in a list of the nation’s top ten states for the sport, noting that Michigan is rightly known as a trout angler’s paradise—Trout Unlimited was born here, after all—but also offers an outstanding variety of fly-fishing experiences. Blog editor Kirk Deeter planned to reevaluate and update the top-ten list,

But when I got to thinking about it, I realized I’d still rank Michigan as the far-and-away number one…I know plenty of people from Michigan who travel to Florida, Colorado, Wyoming, Montana, Alaska and many other places to go fishing. But what warms my heart is knowing that anglers from Colorado, Wyoming, and Florida are seeking out Michigan as a fly-fishing destination. If you haven’t yet, you really should.

Whether it involves fishing or not, have a great weekend!