With the sun setting on the New York City skyline behind us, Bill Latka, a filmmaker and leader of the Traverse City chapter of 350.org, read the following passage over the loudspeaker to the 55 exhausted and exhilarated travelers as we began our 18-hour bus ride home: “Organizing a big march is like throwing a rock in a pond: the splash is exciting, but the real beauty is in the ripples.” It was written by one of the organizers of the People’s Climate March, and it rings so true.

The march was led by indigenous people and frontline communities—the people first- and most-impacted by climate change. Joining them were New York Mayor Bill de Blasio, United Nations chief Ban Ki-moon, former Vice President Al Gore, and celebrities like Leonardo DiCaprio. Filling the streets were parents with babies, elementary school classes, senior citizens, marching bands, artists, and 50,000 college students. There were people from all over the world and the U.S., including six busloads of people from Michigan. This really was a people’s march. 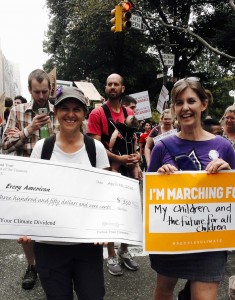 On my bus were physicians, teachers, parents, store clerks, retired couples and college students. We chose to sleep two consecutive nights on a bus because we had to get back to our jobs, classes, and young children. It wasn’t easy, but it was worth it.

The most stunning moment of the march came at 12:58 p.m. when absolute silence spread through the streets. This was organized to honor those who are already suffering from the impacts of climate change. Then at 1:00, a roar that sounded like a jet airplane swept down the street as everyone made noise to sound the alarm that climate change is here and we need to act.

In addition to the march in New York, there were 2500 other events worldwide, with 270,000 more people involved. We made history on Sunday, and it was a splash heard around the world.

We began to see the ripples immediately. The march made the front page of major newspapers like the New York Times, and appeared in thousands of news outlets around the world. Media coverage of climate change has been disturbingly quiet for far too long. While TV news coverage was less than stellar, it was encouraging to see the march earn so much ink.

The day after the march, hundreds of institutions, governments, and individuals with $50 billion worth of assets pledged to divest from fossil fuels. Divestment has already doubled since January, and it is catching on as prominent investors like the Rockefellers join in.

On Tuesday, President Obama joined world leaders at the U.N. summit on climate change and pledged to lead. “The alarm bells keep ringing, our citizens keep marching,” he said. “We cannot pretend we do not hear them.” The vice premier of China, the world’s other leading emitter of greenhouse gases, also pledged to make a greater effort to address climate change. While the real commitment will come when negotiations begin later this year in Peru, the political will shown at these talks is promising. On the local level, all of us returning from the march are causing our own ripples in our communities. When I returned home I was talking to a family member about the march. She told me about a conversation with a friend in denial about climate change and how she told that friend, “I have to believe that if Kate and 400,000 people are marching in the streets, climate change is something we need to do something about.” To that her friend responded, “Well, you make a very good point.”

This march itself was a ripple of earlier actions, and the movement is growing quickly. In February 2013, some 40,000 people gathered in Washington D.C. for the first climate rally, which at that time was the largest climate gathering in the U.S. The fact that the crowd has grown tenfold in 18 months gives me hope that we can do what it will take to avoid the very worst consequences of climate change.

We need immediate action to keep global warming below 2 degrees C, which is what scientists agree we need to do to prevent devastating consequences. We need to cut greenhouse gas emissions by 80% by 2050. We need to move fast and we cannot delay any longer. While the growing movement gives me hope, I know that it will take more than 400,000 people in the streets. It will take all of us doing hard things, and we need environmental groups to lead. We need to do more to hold our elected officials accountable for being silent and failing to act on this most critical issue. We need to push for a faster transition away from fossil fuels and for policy solutions that will get us there, like putting a price on carbon. We need to help the climate change movement to continue to grow.

We need to stop waiting for it to be safe to talk about climate change. We need to be the ones pushing for climate change to be on the top of the agenda, even when it is uncomfortable. That’s what the march was doing, and it is working.